There's a lot of change going on right now, and it's seasonally fitting so I'm rolling with it.

My roommates and I are leaving our apartment next month. The building we live in has been sold, and our apartment is illegally zoned - ain't that great? So the apartment hunt is on, and this time we're only looking for a two bed room.

Roommate Tom will be going back to just buddy Tom here, because he's moving in with his life long pal Anthony. I have to admit I was shocked to hear the news. I couldn't believe Anthony was finally leaving his mom's house, but 30 does seem like the right time to spread your wings.

This leaves Pink and I...and our two boys: 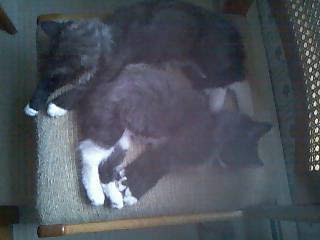 We have yet to name the boys so now they just go by their collar colors - Red and Blue. They are only 3 months old; so the collars barely fit. We have to keep them on though, because the bells upon them are the only way we can find them sometimes.

My favorite thing they do so far is when they play fight. They have these flying jump kick moves that make them look like Matrix kittens. It's awesome.

In other news, my sketch group premiers "Off Broadway" tomorrow night. The Ultimate Experts will be at the Producer's Club 358 West 44th Street (between 8 & 9 Avenue).

This is probably one of the coolest things I'm about to do in my life.

I've had my comedic sketch writing performed before
but to have an entire show with my sketches
and sketches I've collaborated on that are written by amazing comedic writers
and I get to act in them
it's a dream coming true!
Obviously, I'm excited.
(Here's our MySpace page)

I've bought some Sleepy Time Tea with Valerian Root to help me sleep tonight. Hopefully, the mischievous kitties will not get into it - apparently Valerian Root helps humans sleep, but it is like crack for cats.