Take This Freedom Fry Lovers: I don't hate the French

And it turns out, not all of them hate us either: 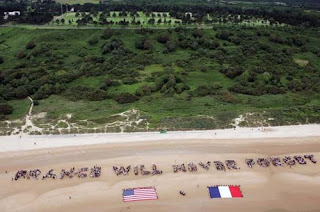 On the 4th of July this year (2007), 2,500 French people spelled out their thanks for the American Soldiers that gave their lives in Normandy.

This Sunday, to show your thanks, eat some freakin' French Toast,
or enjoy a croissant.

They're really not all bad in France,
think about what Americans look like to the rest of the world.

Also, as good Americans we should all just put our energy into
hating those who hate our freedom.

Um, except when they bring up a good point about it,
like David Cross.

Below is an excerpt of a review of "It's Not Funny"
Cross's 2004 Comedy CD. The review is by Gabe Gloden
and it appeared in Stylus magazine.

When he compares Bush’s appeal to American soldiers to pray for him to that of a king, he adds another layer of audacity to the truth. But when he adopts the character of a young soldier after an attack praying for the President, Cross reveals the hypocritical evil at the root of the conflict.

“God… please see that Mr. Bush…
has the strength to…
finish his lobster salad…
now I may die.”

It’s not funny, but it can’t help but be hilarious. He even offers some advice to those listeners suffering through the same media assault on our psyche. Whenever George Bush utters, “The terrorists hate our freedom”, simply summon imagery of The Simple Life’s “two rich, giggling cunts”. “You know what, I hate our freedom… that’s all we’ve done with it!?” could be a mantra for anyone who craves not only 1st Amendment freedoms, but a deeper, psychic freedom.
Read the full review.
If interested in hearing more from comedian and my television-distant-relative
David Cross
please click here to purchase "It's Not Funny".
Posted by Unknown at 7/21/2007 12:57:00 PM